Note: In Japan, the family name comes before the given name.

​Reiki is a Japanese word which means a mysterious, ethereal & sacred energy of the heaven & earth, that is, of the universe that sustains all life. Reiki Ryoho (pron. Ray-key Ree-oh-hoh), means Reiki therapy or Reiki Healing Art. Reiki was realised on Mt Kurama by Mikao Usui in 1922. Through Usui Mikao, Reiki therapy has spread all over the world, bringing wellness & comfort to all who receive including patients in palliative care. ​
​In the small village of Taniai, there is a Jodo Shu (Pure Land) Buddhist temple where the generation after generation of the Usui family’s remains are located. In the same village, there is a Shinto Shrine with a huge stone Torii (gate) where Usui Mikao and his younger brother’s names, Sanya and Kuniji, are engraved. Usui Sanya was a medical doctor in the army and after retirement, opened a clinic in Tokyo. Usui Kuniji was a Police Officer in the local area where Usui Mikao was born. Kuniji retired and became a Shihan of the Gakkai and was teaching Reiki Ryoho to local people.

In 1922, Usui Mikao climbed Kurama yama (mountain) north of Kyoto, the ancient capital city of Japan.  At the time, he was almost 57 years old, an elderly man where the average lifespan was 50 in Japan. Here, he undertook severe training by fasting and meditating for 21 days. He felt one Great Reiki and became enlightened, it is believed in March 1922. The exact date is not known. Usui Sensei accidently realised that he was given a wonderful gift, a mysterious healing ability in his hands.
Why Usui Sensei climbed the mountain and why he undertook the severe training for 21 days is unknown and unable to be verified.

Usui Sensei wanted to share this wonderful gift with as many people as possible instead of keeping it to himself and his family as was Japanese tradition. So he returned to Tokyo where he was based. He settled in Harajuku, Aoyama, Tokyo in April 1922 and established the Usui Reiki Ryoho Gakkai (Association). The URR Gakkai still exists in Tokyo today. The URR Gakkai was supported by the Japanese Imperial Navy, the 2nd  president of the Gakkai was Ushida Juzaburo, rear admiral of the Navy, the 3rd president was Taketomi Kanichi, rear admiral, 5th president, Wanami Hoichi, vice admiral,  and Hayashi Chujiro,  captain. The reason why the Usui Reiki Ryoho Gakkai was supported by the Japanese Imperial Navy is unknown. It is speculated that Reiki Ryoho was seen as useful, convenient, and beneficial on board the naval ships.

In the Great Earthquake of 1923, Usui Sensei offered his Reiki Ryoho to those in need. His fame grew from his healing activities.

Usui Sensei was only one of many Reijutsu Ka (healing practitioners) in Japan at that time. It is said that there were 30,000 Reijutsu Ka but as the founders died so too the many systems they formed. The only exception was Usui Reiki Ryoho.

Due to his fame, Usui Sensei travelled to teach his Reiki Ryoho. While travelling, he passed away from a cerebral haemorrhage on 9th March 1926. In 4 years, he became famous in Japan. The rest of the world had to wait for Hayashi Sensei and Takata Sensei to make Reiki Ryoho widespread in the world.

​A year after Usui Sensei’s death, the Usui Reiki Ryoho Gakkai erected a memorial stone next to the Usui family gravesite in Saihoji Temple of the Jodo Shu (Pure Land) Buddhist sect in Tokyo. On the memorial stone, it describes Usui Sensei and his life. While there are many facets of Usui Sensei’s life engraved on this memorial, many are not detailed enough to be certain of his specific training and much is not verifiable. This is the source of legend of Usui Mikao.

​Below is the translation of the Usui Memorial stone by Inamoto Hyakuten.
and body. Having heard of his reputation all over, people crowded around to seek his teachings and treatments.  Ah, how popular it is!

Sensei, commonly known by the name ‘Mikao’, with an extra name (pseudonym) ‘Gyohan’ is from Taniai-mura (village) Yamagata-gun (county), Gifu-ken (prefecture). He is descended from Chiba Tsunetane. His father’s name was Taneuji and was commonly called Uzaemon. His mother was from the Kawai family.
​
Sensei was born on August 15 of the first year of Keio (C.E.1865). From his youth, he surpassed his fellows in hard work and endeavour.
When he grew up, he visited Europe and America and studied in China. Despite his will to succeed in life, he got stuck and fell into great difficulties. However, in the face of adversity he strove to train himself even more with the courage never to yield.

One day, he climbed Kurama-yama and after 21 days of a severe discipline without eating, he suddenly felt One Great Reiki over his head and attained enlightenment and he obtained Reiki Ryoho. Then, he tried it on himself and experimented on his family members. The efficacy was immediate. Sensei thought that it would be far better to offer it widely to the general public and share its benefits than just to improve the well-being of his own family members.

In April of the 11th year of Taisho (C.E.1922) he settled in Harajuku, Aoyama, Tokyo and set up the Gakkai to teach Reiki Ryoho and give treatments. Even outside of the building it was full of pairs of shoes of the visitors who had come from far and near.

In September of the 12th year (C.E.1923) there was a great earthquake and a conflagration broke out. Everywhere there were groans of pains from the wounded.  Sensei, feeling pity for them, went out every morning to go around the town, and he healed and saved an innumerable number of people. This is just a broad outline of his relief activities during such an emergency.

Later on, as the ‘dojo’ became too small, in February of the 14th year (C.E.1925) the new suburban house was built at Nakano according to divination.
Due to his respected and far-reaching reputation many people from local districts wished to invite him. Sensei, accepting the invitations, went to Kure and then to Hiroshima and Saga, and reached Fukuyama. Unexpectedly he became ill and passed away there. It was March 9 of the 15th year of Taisho (C.E.1926) aged 62.

His spouse was Suzuki, and was called Sadako. One boy and one girl were born. The boy was named Fuji and he succeeded to the family. Sensei’s personality was gentle and modest and he never behaved ostentatiously. His physique was large and sturdy. He always wore a contented smile. He was stout-hearted, tolerant and very prudent upon undertaking a task. He was by nature versatile and loved to read books. He engaged himself in history books, medical books, Buddhist scriptures, Christian scriptures and was well versed in psychology, Taoism, even in the art of divination, incantation, and physiognomy. Presumably sensei’s background in the arts and sciences afforded him nourishment for his cultivation and discipline, and it was very obvious that it was this cultivation and discipline that became the key to the creation of Reiho (Reiki Ryoho).

On reflection, Reiho puts special emphasis not just on healing diseases but also on enjoying wellbeing in life with correcting the mind and making the body healthy with the use of an innate healing ability. Thus, before teaching, the ‘Ikun’ (admonition) of the Meiji Emperor should reverently be read and Five
Precepts be chanted and kept them in mind mornings and evenings.

These are truly great teachings for cultivation and discipline that agree with those great teachings of the ancient sages and the wise. Sensei named these teachings ‘Mystic Art to Invite Happiness’ and ‘Miraculous Medicine to ‘Heal All Diseases’; Notice the outstanding features of the teachings.
Furthermore, when it comes to teaching, it should be as easy and common as possible, nothing lofty.
Another noted feature is that during sitting in silent meditation with Gassho and reciting the Five Precepts mornings and evenings, the pure and healthy minds can be cultivated and put into practice in one’s daily routine. This is the reason why Reiho is easily obtained by anyone.

Recently the course of the world has shifted and a great change in thought has taken place. Fortunately with the spread of this Reiho, there will be many who can be helpful to the way of the world and the minds of people. How can it be for just the benefit of healing chronic diseases and longstanding complaints?

A little more than 2,000 people became students of Sensei. Those senior disciples living in Tokyo gathered at the dojo and carried on the work (of the late Sensei) and those who lived in local districts also spread the teachings.
Although Sensei is gone, Reiho should still be widely propagated in the world for a long time. Ah, how prominent and great Sensei is that he offers the teachings to people out there after having been enlightened within!

Of late the fellow disciples consulted with each other about building the stone memorial in a graveyard at Saihoji Temple in Toyotama-gun so as to honour his merits and to make them immortalized and I was asked to write it.
As I deeply submit to Sensei’s greatness and am happy for the very friendly teacher/disciple relationships among fellow students, I could not decline the request, and I wrote a summary in the hope that people in the future shall be reminded to look up at him in reverence.

Mrs Hawayo Takata (1900-1980) a Japanese American born in Hawaii, was diagnosed with a serious gall bladder problem. She traveled to Japan where she was treated with Reiki by Hayashi Sensei. She recovered completely. She worked for Hayashi Sensei as a Reiki student for a year before returning to Hawaii. Hayashi Sensei visited Mrs Takata in Hawaii in 1938 & made her Shihan (teacher). Mrs Takata later made 22 Reiki Masters & thanks to their devotion, Reiki Ryoho became widespread in the West.

Reiki lineage is very much like a family tree. Reiki teachers should be able to trace their lineage back to Mikao Usui, the founder of Reiki Ryoho. 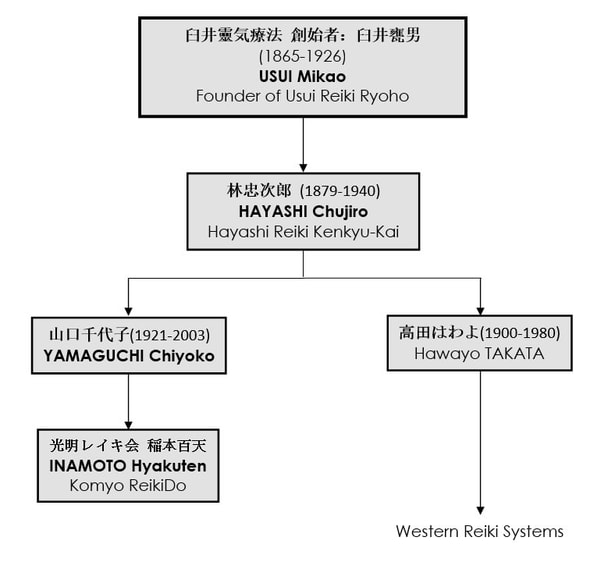 ​Note: In Japan, the family name comes before the given name.

Get in Touch With Us